I just took a few minutes to update my genre biography. Doesn't look too shabby for a no-talent Sad Puppy hack, I suppose:

Lou Antonelli started writing science fiction in middle age; his first story was published in 2003 when he was 46.
He’s had 124 original short stories published in the U.S., U.K., Canada, Australia, Brazil India and Portugal in venues such as Asimov's Science Fiction, Jim Baen's Universe, Tales of the Talisman, Andromeda Spaceways In-Flight Magazine, Greatest Uncommon Denominator (GUD), Daily Science Fiction, Buzzy Mag, and Omni Reboot, among many others.
His first professional science fiction short story sale, “A Rocket for the Republic” (Asimov’s Science Fiction Sept. 2005) was the last story accepted by Editor Gardner Dozois before he retired after 19 years. It placed third in the annual Asimov's Science Fiction Readers Poll.
His collections include “Fantastic Texas” published in 2009; “Texas & Other Planets” published in 2010; and “The Clock Struck None” and “Letters from Gardner”, both published in 2014. "Letters from Gardner"was a finalist for the Best Related Work Hugo in 2015.
His debut novel, the retro-futurist alternate history “Another Girl, Another Planet”, was a finalist for the Dragon Award for Alternate Histort in 2017.
His story “Great White Ship”, originally published in Daily Science Fiction, was a 2013 finalist for the Sidewise Award for alternate history.
His short story “On a Spiritual Plain”, originally published in Sci Phi Journal, was a finalist for the Hugo award in 2015.
A Massachusetts native, Antonelli moved to Texas in 1985 and is married to Dallas native Patricia (Randolph) Antonelli. They have three adopted furbaby children.

Moral: Don't let other people tell you who you are, especially if they are flaming assholes.
at July 31, 2018 No comments: 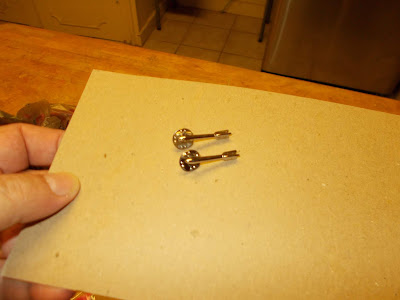 A big thanks to John Lorentz, who was the administrator for the Hugo awards in 2015, for getting me replacements for the pins I lost. That is very, very nice of him.
at July 27, 2018 No comments: 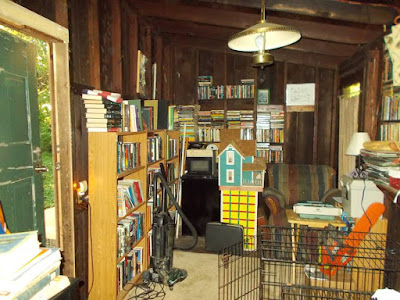 I have a writing shed behind our house, We call it The Library because that's where all my books are shelved. It is also home for our furrbabies' kennels where they sleep at night. It has electricity and some amenities, such as a refrigerator, microwave, and air conditioning. This is where I can retreat when I'm up against a deadline and need to write with no distractions. Over on the right of this photo you can see my armchair and typewriter.

This is where I wrote the first draft of my story that will be in the forthcoming Superversive Press Planetary anthology, "Dark Luna". I scanned the pages and covered them to a text file. I plan to send them to Declan Finn as a souvenir.
at July 21, 2018 1 comment:

I have a small building behind the house where I keep my books, some furniture and the dog kennels. Because of its primary use, we call it The Library.

I have a lot of books, and for almost ten years I kept many boxes of them in astorage shed behind the last house where we lived. At the end of 2016, when we moved to Clarksville, when I went to move those boxes, I realized I had made a mistake. Being dark and undisturbed for so many years, cockroaches had got into a number of them.

After the cleanup, I resolved to not store books like that again, and so I have lined the walls of The Library with them.

The building is at the rear of the brick patio behind our house. The wooden carport is attached. It's leaning a bit with age, so I suppose The Library building may be helping to prop up the carport.

The Library does have electricity, so there is a refrigerator in there as well as a microwave. But when we bought the house the window for the air conditioning was empty.

Today Patricia and I saw a 5,000 BTU air conditioner for sale for a good price at the Walmart in Paris, so we bought it. I installed it and it is cooling the building down.

I think the pups will be pleasantly surprised when they go to bed tonight.
at July 07, 2018 1 comment:

While in Chattanooga for Libertycon, I met a number of authors who were among the so-called Sad Puppy finalists for the Hugo awards in 2015. If you are ever a finalist, you get a small lapel pin shaped like a rocket. I had two because I was a double-Puppy in 2015.

We fellow sufferers talked about the Puppy experience a bit. I told a friend why I didn't have my lapel pins any more.

I lost them the previous weekend.

I explained I never wore my lapel pins, but last year, at the last convention I attended for 2017, I met a fellow 2015 finalist who wore his. I asked if he was afraid to wear it in public. He seemed puzzled at the question.

My colleague said he earned his pin and he was proud to wear it.

I decided I'd start wearing my pins this year, and I took them with me when I went to SoonerCon in Oklahoma City June 22. After I checked in and got my badge, I took them out and I was going to stick them on.

I took the first one out, and as I tried to stick it on, I fumbled it. I never saw it land. It disappeared. I never saw it again. I put the second one back in its bag. The next day, I realized I'd lost it also.

After I told this story to one colleague at Libertycon, he said, "Well, you can always ask WorldCon for a replacement."

I laughed. "You've got to be kidding! They didn't want us to have them in the first place! Do you think they would ever give me a replacement!"
at July 07, 2018 1 comment:

It's nice to take this week off from work, the newspaper office is closed for our summer break. Last week was very busy. First, I attended Soonercon in Oklahoma City June 22-24. Then I came back and put out the June 28 edition of the paper. Then I turned right around and put together the July 5th edition of the paper. It was done Thursday.

In years past the paper has skipped the paper the week of the Independence Day holiday because our office is closed for summer break. but I decided we would still get our subscribers a paper. It was sent to the printer and then printed Monday, and put in the mail Tuesday so people would get it Thursday as usual.

Thursday I left for Chattanooga and Libertycon, staying over night on the way, and arriving Friday. I drove back to Clarksville Sunday. So it was a busy block of days.

I do have a confession to make regarding Libertycon: I shirked part of my duty. My last scheduled event was a reading at 1 p.m. Sunday. Two years ago, the last time I attended, I had ONE person come to my reading, Doug Loss. I met him at the con this year, and thanked him for coming last time.

Facing a 12-hour drive home, I felt leaving after the kaffeeklatsch versus the reading would probably decide whether I made the trip in one day, or whether I would have to stay overnight along the way. I decided the smart thing to do would be to leave at 10:30 a.m. and save the money. Things worked out as planned.

If anyone had attended my reading and wanted to buy a copy of my collection, I was already sold out. I didn't participate in the Authors' Alley, but I sold or gave away all the copies I had of "In the Shadow of the Cross" by Saturday. Two years ago I had been in the Authors' Alley and didn't see a book.

Two people grabbed me after panels during the con to sign books they had brought with them, a copy of "Cross" as well as "Another Girl, Another Planet".
at July 04, 2018 No comments: