It's fascinating that you can go for weeks, if not months, and nothing happens of interest, and then for some strange reason - WHAMMO - everyone schedules events at the same time.

This past weekend there were four different events I could have gone to. Locally, the Northeast Texas Writers Organization had a weekend retreat and workshop. On the state level, the Associated Press Managing Editors (APME) held their annual Texas meeting in Austin. Regionally, Conestoga was held in Tulsa. Nationally, the Nebula awards weekend was in Los Angeles.

I've not had much to do with the local writers group - they're mostly old people who've taken up writing in retirement. The APME conference is something the paper would have paid for; last year I was sent to Galveston, but this year the trip was cut as part of the overall belt-tightening because of the economy.

I attended Conestoga in 2006 and 2007, but skipped it last year - again, to save money - and the same applies this year. I really, really liked the Con, I've had some of my best times at a con there, but ya' can't be every place. They also moved it from July to April this year, which wiped it off my calendar very early because of the aforementioned conflicts.

I went to the Nebulas last year because they were in Austin, but otherwise there was no way I was going to schlep myself out to the West Coast this year. I hate traveling, in general.

In case you didn't see it somewhere else, here is the list of winners and honorees:

Progress on the collection

Ian Strock emails to say the collection is in his hands safe and sound and he's proofing the manuscript. Still up in the air is the subject of cover art and publication schedule. I suggested contacting Science Fiction Trails about art; I thought the cover of issue No. 4 (which ran "Professor Malakoff") was a hoot - the robot cheating at poker.

Publication schedule is problematic, this this is the first original title they've bought. We'll keep you posted.
at April 26, 2009 No comments:

The latest from Fantastic

Publisher Warren Lapine writes that Fantastic Books has agreements with several authors to bring back into print a number of books, including:

Linda E. Bushyager:
The Spellstone of Shaltus
Master of Hawks

Dean Wesley Smith:
Laying the Music to Rest
at April 25, 2009 No comments:

The collection is complete and I emailed Ian Strock the word document this evening.

Coincidentally, news about the purchase was posted on sfscope today. Here's the story:


SFScope Editor and Publisher Ian Randal Strock is taking on a new part-time role: he's now an acquiring editor for Wilder Publications' new sf/f imprint Fantastic Books (see this article for more on the imprint). SFScope remains his main focus, but in his extra time, he'll be reading novels and collections for the new imprint.

Prior to founding SFScope, Strock was the news editor of Science Fiction Chronicle. Before that he was the editor and publisher of Artemis Magazine, and the associate editor of Analog Science Fiction and Fact and Asimov's Science Fiction magazines. He is also a freelance editor, and on the editorial staff of Padwolf Publishing.
at April 21, 2009 No comments:

The bad news I spent most of the weekend bed-ridden with what seems to have been an attack of food poisoning. The suspect is a roast beef hero from a local sandwich shop where I ate Saturday night. Patricia, thankfully, didn't have the same thing, and so escaped unscathed.

Good news is that Howard's introduction has arrived, so we are in the home stretch for my "Fantastic Texas" collection. I dropped Ian Strock a note to to let him know it will be on its way soon.
at April 20, 2009 No comments: 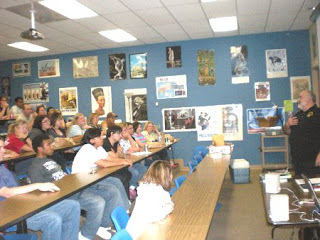 Here is a photo of me talking to the college students Thursday night, taken by one of the host professors.
at April 18, 2009 No comments:

I haven't posted much this week because I have been busy writing the intros to each story in my collection "Fantastic Texas", as well as doing the editorial revisions.

I spoke to over 50 students who attended the screening of "Fahrenheit 451" at Northeast Texas Community College last night (Thursday). Although there was some chatter at the start of the movie, the teens got quiet and actually payed close attention to the movie. The only time they hooted was during the scene when Montag was on the run and a quartet of policemen go looking for him using jet packs. The special effects look so bad now...

The two professors who hosted the s-f film series said the finale far and away was the best attended screening.
at April 17, 2009 No comments:

Insurance company says our roof is kaput, and it will have to be replaced.
at April 15, 2009 No comments: 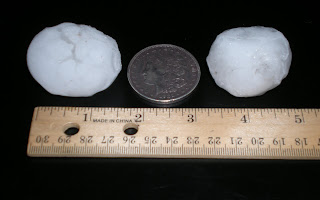 Nasty storm blew through town last night, and dropped golf-ball sized hail on the house. I had to run outside and pull my car in the garage while getting my brains knocked out. I normally park in front because we have a semi-circular driveway. I like to pull in and drive out, and also parking there keeps people from using it as a turnaround (we're on a fairly busy street).

Took a picture of the hail with a ruler and a silver dollar for comparison.

Howard wrote and said he's working on the introduction to the collection. I'm working on my story intros and edits.
at April 10, 2009 No comments:

Not a blasted thing new to report in ther past few days, so when in doubt, back to Metropolis:
at April 08, 2009 No comments:

The Lullaby of the Blogosphere

You know, back during the Great Depression, when people were scrambling around for ideas on how to solve the economic crisis, there was a slew of political ideas being floated around - socialism, fascism, technocracy, social justice, social credit, and on and on.

Today, there's basically one idea left - socialism - or so it seems. Truth be told, the real story is that there simply isn't that much diversity left in the media, and it reflects a small segment of America's elite, which is statist. Libertarians - heck, even social democrats - aren't getting much air time.

The down side to this is that, if there is any kind of genuine and spontaneous original political movement in the next few years, it will seemingly come out of nowhere because the media wasn't covering it. I'm hearing all sort of rumblings about "tea parties" and the Republic of Texas movement, but nobody is covering it.

Ron Paul's campaign for president last year attracted some attention, but the media elite only reported it when it became impossible to ignore.

Hope this all turns out for the best. Meanwhile, take a look at this screen capture I came up with. It's from 1935 - the depth of the last depression - and no, it isn't a fascist party rally. It's from the "Lullaby of Broadway" dance number by Busby Berkley from "The Golddiggers on 1935". 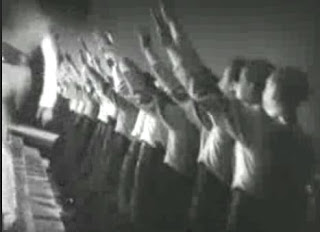 A Rocket for the Republic
The Witch of Waxahachie
The Cast Iron Dybbuk
Avatar
Silence is Golden
The Rocket-Powered Cat
Rome, If You Want To
Big Girl
The Silver Dollar Saucer
Body by Fisher
Video Killed the Radio Star
Professor Malakoff's Amazing Ethereal Telegraph

I got word in the mail yesterday. Needless to say I'm tickled pinkless. I'm now working on the editor's revisions and writing the intros to each story. 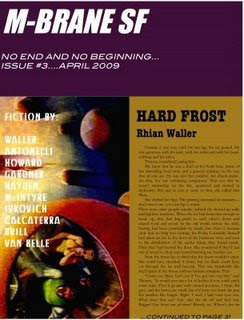 It's the first of April and issue No. 3 of M-Brane SF is out. I'm very proud of my story, the second in the line-up, "Good News for the Dead".

The TOC, copied from my pdf author's copy of the magazine, is as follows: