I'm proud to announce that my alternate history short story "Port Radium" will be published in an upcoming anthology from Rough Edges Press, tentatively titled "Tales From the Otherverse". Thanks go to Publisher James Reasoner.

This is a alternate history with the POD that Dougas MacArthur's grandfather emigrated from Scotland to Germany rather than the U.S. and so MacArthur is a general with the Germans during WWII.
at September 20, 2015 1 comment:

I wonder what's the rhyme or reason for why authors gets picked up for translation in certain countries? Joe Lansdale has been published numerous time in Italy; he's even won a literary prize there.

Howard Waldrop's told me that for some reason he gets published in Finland all the time.

I got a story translated and published in Romania, pretty much out the blue.

Well, like any reprint, it's pretty much found money; in my case, I made almost as much money for the republication as the original sale.

It took a week for my credit union here in East Texas to figure out how to accept the wire transfer from Bucharest. I actually spok to the CEO, who told me they had never received a wire transfer from overseas before.
at September 18, 2015 No comments: 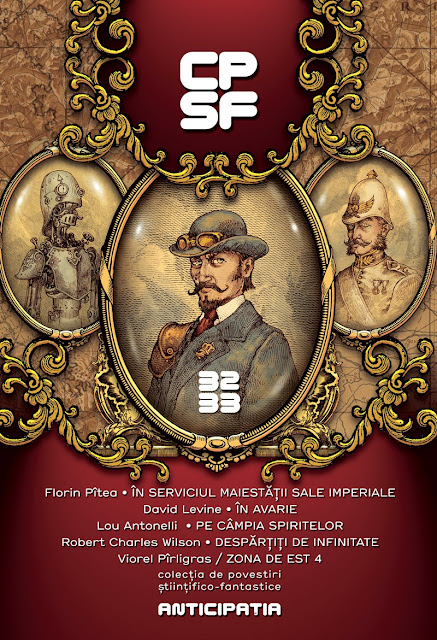 A number of years ago, when I read Robert Heinlein's posthumous memoir "Grumbles From The Grave", I recall him writing about getting checks from overseas for foreign language translations. I thought, "That must be so cool, to have your stories translated and published in a foreign language, and to get paid for it, too."
Well, today I received a wire transfer from Bucharest, Romania, for the publication of "On a Spiritual Plain" in Nemira publishing company's CPSF magazine.
And it IS cool.
Any of you aspiring writers out there, take heart! If I can do it, you can, too!
at September 16, 2015 No comments:

The end of the convention season

I went to seven science fiction conventions this year - ConDFW in Dallas in February, RavenCon in Richmond, Virginia, in April, ConQuest in Kansas City in May, SoonerCon in Oklahoma City and ApolloCon in Houston in June, ArmadiloCon in Austin in August, and Sasquan in Spokane in August.

I enjoyed them all, especially the ones I attended for the first time - RavenCon and ConQuest - except for Sasquan. That was ruined for me because of the Sad Puppies controversy, but that's all (polluted) water under the bridge.

That's the most conventions I've done in one year, and that' all for this year. I made a decision to skip any events after Labor Day - I will not be at FenCon in Dallas, which is coming up Sept. 25-27.
If I travel out of state this fall, it will be for a 40th high school reunion in Massachusetts.

I doubt I will go to nearly that many conventions in 2016, but I have received an invite already, so I know there will probably be at least one.
at September 13, 2015 No comments:

I've spent some time this holiday weekend formatting short stories to Amazon's Kindle program. With the 93 stories I've had published over the years, I have many possibilities for republishing. I've especially tried to focus on stories that may not be otherwise easily accessible, except if you buy one of my collections.

In light of the Sad Puppies affair, I can see why people are turning to self-publishing, anyway. It's easier and more accessible, and you don't have to worry about being approved for political correctness.

Stories I uploaded this weekend include The Amerikaan Way, Rome If You Want To, Comes the JuJu Man, A Rocket for the Republic, The Cast Iron Dybbuk, Great White Ship, The Witch of Waxahachie, Circe in Vitro, and Message Found Written on an End Roll of Newsprint.

After being consistently told from April through August that I am an incompetent writer because of being a Sad Puppy, and being subjected to all those reviews done in bad faith by the s-f literati, it was nice to go back and read some of the stuff I've written over the years.

Making it all worthwhile

I've sold five autographed copies of "Letters from Gardner" since returning from the Sasquan convention. Here is an excerpt from a letter that accompanied the most recent purchase:

"Thank you for your writing. I deeply enjoy grabbing one of your books for an entertaining read when I need to relax and I don't the time or patience to dive into an 800 page epic fantasy or hard sci-fi that I often read. I hope you continue to have success with your writing and we have many more of your stories to look forward to."

The beginning of the end?

Here's a sobering thought: Now that the "No Award" genie is out if the bottle and was used so liberally this year, envision this scenario:

Next year, with a myriad of recommendations and lists proliferating, if there is any variety in the nominations, you will have finalists from many different sources. Voters will rank their personal choices, then drop in No Award before continuing down the list.

Therefore, it's possible that almost EVERYONE will use the No Award choice to some degree, which means that No Award will surely get the most votes overall in any category and win all the categories.