Tempest Bradford jump started the hate campaign against me, then Jim Hines jumped in. Bradford is Joe Goebbels to Nora Jemisin, who's basically turned the SFWA into her own self-promotion racket, just like Tor Books turned the Hugo awards into its own little scheme.

Hines is the same to John Scalzi, who is the single person the most responsible for the politicization of the SFWA. Most recently, Teresa Neilsen-Hayden jumped into the fray.

Neilsen-Hayden is the person who invented the party line against the Sad Puppies. In 2015 she started to attack the Pups a week before the Hugo nominations were announced. Nominees receive their notifications a week in advance, and when the "right" people didn't get their notifications, she realized what happened and went on the immediate attack.

Neilsen-Hayden repeated the lie that I swatted David Gerrold in 2015. Truth is, she invented that lie. Calling the police for protection because you are afraid of a lynch mob is not swatting, it's self-defense. Attacking me by repeating a Big Lie again still doesn't make it true.
at March 29, 2020 No comments:

More on my write-in candidacy

The hate and vitriol directed towards me is very illuminating. My enemies must be tremendously privileged. Normal people, who have to work and scrape for a living, know that you often get into arguments and have to deal with disagreeable people.

Indeed, if you check into their background, you'll find many of the usual suspects either hold government jobs or work at universities. They are insulated from the real world.

Mike Glyer, who runs the web site File 770, used to be an auditor for the IRS (he's retired now).

These people act like being different and disagreeing with them is the worst crime imaginable. Also, because of their jobs they have all the time in the world to attack you on-line. It's not like they do anything for a living.

Chumps like me, who are self employed small business people, only have so much time to engage is this bullshit.

The pile-on instigated by Tempest Bradford, however, was so extreme that I thing it began to disgust some people. It's like the Reign of Terror during the French Revolution - even supporters are afraid they will eventually come after them.

The best way to understand it is to know they have combined the worst elements of both the Communist Party and the Nazi Party.

The old fashioned Communist Party under Joe Stalin in the Soviet Union had what was called the "Party Line". The government determined the narrative for all public events and subjects, and you had to repeat or follow it, or you would be arrested or persecuted.

There was even a term for this, "deviationism".

The SFWA is just an organization, a tool as it were, and it can be used for ill or good. It is not responsible as a group for the worst excesses of the politically correct gang.

They are small, tight-knit like-minded bunch who follow very closely the "Party Line" theory. They come up with a bullshit narrative and then enforce it. Stalin used to purge people or have them shot. The s-f crowd uses the blacklist.

The Nazis under Adolph Hitler followed the "Big Lie" theory of propaganda. Repeat the same story enough times and the people will believe it.

So what we have seen here, for the past ten or 15 years, is the usual suspects use the Big Lie and repeat the Party Line to oppress dissidents.

People have complained about some things I have done in the past, where the story is the Party Line repeated in the Big Lie echo chamber. At this point, the racket is wearing thin. Whether you succumb to these obviously ridiculous accusations is essentially an IQ test.

If you believe in these tall tales, you don't have much credibility yourself.
at March 28, 2020 No comments:

More of the same from the usual suspects 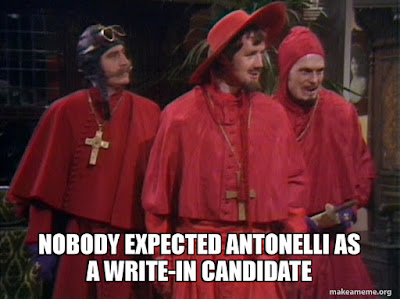 I’ve been a member of the SFWA off and on since 2006. I qualified as an associate member in 2005 after my story “A Rocket for the Republic” was published in Asimov’s Science Fiction. I had my third pro short story sale, “Great White Ship” in 2012 in Daily Science Fiction and qualified for full membership.

I say I’ve been a member off and on because there have been a couple of times I’ve let my membership lapse because money was tight.

I tried running for Vice President in 2013, but the hatred and animosity directed towards me was so great that I dropped my campaign after a week. I never said anything about quitting because I would have been mocked over that, too.

It seems as time goes by the rules for joining the clique running the SFWA racket get tighter and tighter.

This year I was eligible to run, but I didn’t bother. But when the ballot was sent to members, lo and behold, they didn’t even have enough candidates to fill all positions. There was only one name on the ballot for two two-year posts as a director at large.

I saw that, and reasoned, why not seek votes as a write-in? And so I did.

As would be expected, it took a very short time for the traditional lynch mob to attack, led by a no-talent political correctness enforcer named Tempest Bradford. For a week there, it was pretty wild.
Things seem to have calmed down. Voting remains open until April 14, but just about everything constructive as well as destructive has been said by now.

One thing that’s occurred to me as a result of this is to reactivate this blog for my many fans. The attacks on my humanly existence by the Khmer Rouge wing of science fiction has only generated sympathy and more friends for me.