Don't forget, folks, I will be signing and selling copies of my retro-futurist alternate history "Another Girl, Another Planet" at 3 p.m. Saturday in the Dealers Room at Ravencon in Williamsburg, Va.

I only have eleven copies of the book on hand, so there's a possibility I may sell out!

My signing was added at the last minute, so it is NOT in the printed program book.

OK. on Monday I asked the hypothetical question, on my Facebook page - if you could pick an s-f author to be U.S. President, who would it be?

I did not note nominations of authors who are dead, such as Heinlein, Clarke, Asimov or Poul Anderson. I DID count nominees who would be ineligible to serve because they are foreign born.
I have made up a very unofficial tally of the suggestions, and it looks like the winner is...

The clear winner with 18 votes.

It was very close for second place. John Ringo had nine votes and Tom Kratman had eight.

A strong fourth place showing goes to an author who would not be considered right-of-center by any definition, David Brin - which shows there is come diversity of political opinion among my Friends.
Dr. Jerry Pournelle received five votes, and Ursula LeGuin - also certainly not a right-winger - received four.

On the basis of these results, then, if we had right vs. left political tickets, it would be Correia and Ringo vs. the Brin/LeGuin ticket.

Other authors who received more than one vote each were: 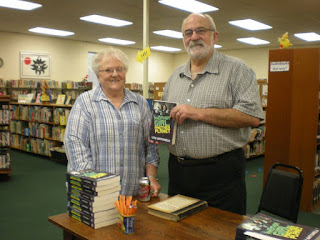 I had my first public signing event for "Another Girl, Another Planet" Saturday morning at the Red River County Public Library.

Helen Pryor bought the first copy. She is giving it to her granddaughter Chloe, who is an aspiring writer, and I inscribed it to her.

Another purchaser was Donna Hausler. When she told me her name, I had to divulge that in 2015 when I was writing the book, I picked a surname at random from the newspaper as the name of the "Girl" of the title - and that last name is Hausler.

It's actually a fairly common name in Red River County.

Patricia joined me. The library is open from 9 a.m. to noon on Saturdays. After the library closed we went across the street to Tracy's Cafe and used some of the proceeds for lunch!
at April 09, 2017 No comments:

Thinking of the master

Today is the anniversary of the death of Isaac Asimov in 1992. I met him in 1984 when I was out on a date in Greenwich Village. The Village Light Opera Company was performing "The Yeoman of the Guard". I did not know he was a big Gilbert and Sullivan fan.

I was sitting in my seat during the performance when I commented to my date, "This guy in front of me looks a lot like Isaac Asimov." Then I took another look and realized it WAS Isaac Asimov.

During the intermission myself as well as some other fans chatted with him in the lobby. A woman walked up and took a photo of us together. Asimov asked "A friend of yours?" I told him I had no idea who she was. Years later the incident gestated into the short story "Won't You Come Home, Bill Buckley?"

In the summer of 1992 I was living in Texas and heard of somewhere that Asimov had died some months earlier. I was surprised I had missed the news initially, but I took a guess as to the reason why, and I was right.

His death came a month before the local spring election date, which is always the first Saturday in May. I was engrossed in a hot and hectic school board election, and wasn't paying attention to outside news at the time.

I won the election, by the way.

Eleven years later I attended my first s-f convention, and 13 years later I had my story "A Rocket for the Republic" published in his namesake publication.
at April 06, 2017 No comments:

Good Lord, Lou Antonelli did something I thought was impossible. He made me like an alternative history story,  and usually I hate those.

The story starts and ends with three aluminum crosses under a Martian sky.  In between we are treated to a world where the West and the Eastern Bloc have a space race, instead of an arms race, and the moon is an old colony: Mars is the new frontier.  As with any alternative history piece there are names and events you will recognize, but in new contexts. In this world Asimov and a team make real robots, then androids, and the androids cause that world’s equivalent of the Cuban missile crisis. This gets robots, and androids, exiled to the moon, and then Mars.

Dave Schuster gets sent to Mars as a political appointee. The head of the government there is dead and the second in command dies when he is enroute: he is the Martian government, for now.  Dave finds out that the old governor got less and less done as he got ill, and the second in command did nothing but party. He has his work cut out for him, catching up on the backlog. As Dave tackles the work a number of things do not add up until he sees hidden danger amid the charm of the techie frontier and the threat grows so out-of-control it reminded me of the sort of situation Miles Vorkosigan would get into.  I am not going to spoil the ride by telling you more than the plot touches on the concept of self-aware robots in surprising ways.

Larry Niven blurbed the book.  He loved it, and said it was great ideas, well told. He was right.

I am proud to announce that, as a result of a long period of reconciliation as well as a practical need on the part of a distinguished author, I am collaborating with David Gerrold on a Star Trek tie-in original novel, "The Tribbles of Texas".

"One venue that has never been visited in the Trek Universe is Texas," says David. "And like so many people, I have always been fascinated by the Texas frontier during the period of Westward expansion."

"I have an outline for a story where the crew of the Enterprise returns to a locale similar to that depicted in 'Spectre of the Gun', but inadvertently transports a continent of tribbles with them," he continued. "The interaction between the crew of the Enterprise and the Melkotians while being overrun by tribbles should be... umm... fascinating." 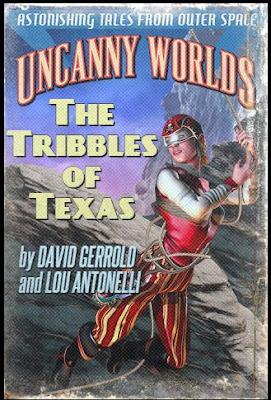 As a result of the need for authenticity in the setting, David asked if I would sign on as a co-author and I agreed. Although we had significant differences during the late unpleasantness of the Hugo nomination period in 2015, time heals all wounds, and after a substantial cooling off period we have subsequently reconciled - a process aided by the 2016 presidential election, where I commiserated with David on the election of Donald Trump.

"Lou's a fascist, but otherwise a nice guy," said David. "And talented enough to be of some small use in this project. He certainly knows Texas and the region well-enough. I think this will be a mutually beneficial collaboration."

"I think we will get along fine, so long as he keeps his damn wop hair trigger temper in check," he concluded.

I appreciate the chance to do something helpful to both the genre and David personally, and I look forward to working with David on "The Tribbles of Texas".

I am also grateful that Adam-Troy Castro has agreed to act as a mediator and otherwise help facilitate the collaboration.
at April 01, 2017 No comments: