Some of you may recall how I told the story last month of losing both of my original 2015 Hugo finalist pins while in Oklahoma for SoonerCon in June.

I fumbled the first one while trying to put it on my badge - I never even saw it land. I have no idea what happened to the second, but it disappeared, also.

I had a thought recently. Both pins had been put away since 2015. SoonerCon was the first time since then that I took them out with the intent of wearing them.

I wonder, with all the negative energy they possessed, did they simply disintegrate once disturbed???
at August 28, 2018 No comments: 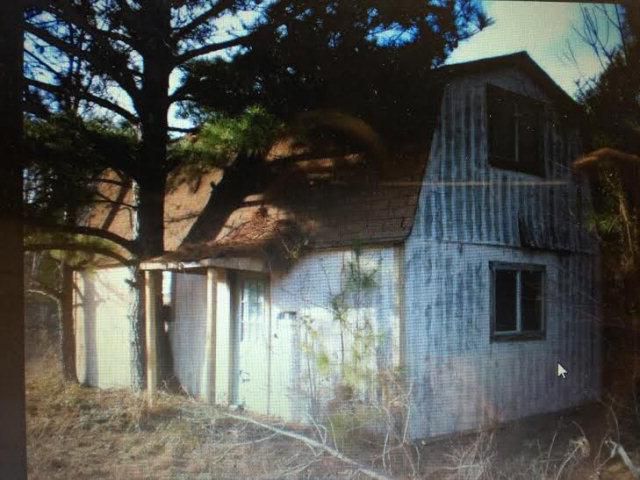 On Aug. 22 I posted a photo of a run down two-story cabin on my Facebook page. I thought it was atmospheric, and I was curious as to what people’s reaction would be, which I asked to be expressed in one word only.

I found the responses fascinating, and now I will tell the story behind the photo.

In 2003 my wife and I had the opportunity to buy some property at a tax write-off sale. This is when the county sells land seized for the non-payment of property taxes. I worked at the local newspaper that published the legal notice, and I noted that, in one property’s description, there was a structure (usually land sold like this is vacant).

I inspected the property and saw that, indeed, there was a small two-story house. Apparently someone bought and had it moved to the site, but then never did anything to it. It wasn’t finished out inside, and there were no utilities.

We bought it was $1350 as an investment, and cleaned out the building (it was full of junk) and cleaned up the property a bit. I thought it was a pretty setting and had a lot of potential. I hoped one day we could fix it up and even use it for our retirement.

I lost my job at the newspaper in 2005, and changed jobs again in 2007. In both cases, we moved farther and farther away from the property. We ended up in both cases two hours away. It was difficult to visit it on a regular basis, much let keep it up. It was all I could do to keep it secure.
My wife never liked it and thought it was a waste of time, so we never agreed to spend any money on it. It slowly deteriorated.

I felt that, no matter what, it was an investment. In 2015 I went to work at The Clarksville Times, and in 2016 we bought a house in Clarksville. Someone made an offer on the property for $6,000, so we sold it and used it for the down payment on our new home. My understanding was that the new owner planned to tear down the cabin, clear the lot and put a new manufactured home there.
I always thought it was cute and rustic, and it was in a very pretty setting, but things never jelled for us to make anything of it, so when the time came we let it go.

Ironically, our new home in Clarksville includes a small bunk house behind the main house that pretty much is what I would have thought that old cabin could have been. I use it as a library, and it has electricity and air conditioning. It’s where the dog kennels are and where the pups sleep at night.

I found that old photo of the cabin, and I was curious what people would make of it, which is why I posted it. It was an interesting exercise.
at August 26, 2018 No comments:

We're having some problems house training Bella. She will go to the door and go outside on her own, but she won't actually go in the yard alone. This is a problem because:

Sugar is such an Alpha she will never follow another dog outside. If anyone else goes ahead of her, she will not go out the door. She is not a follower, she's always been that way. So she won't go outside if Bella went first.

The upshot is Bella comes back in without having actually gone in the yard, with the expected results.
at August 05, 2018 No comments:

I've always found a library discard sale to be a great place to buy neat old books. When I was a student at Columbia University in New York City I would buy books that way at Butler Library. I still have a number of them, including a 1920s copy of H.G. Wells "Outline of World History".

Our local library has its own sales room, and I recently picked up a copy of a 1947 book called "These Wonderful People". I never heard of the publisher, The Peoples Book Club, so I looked it up.

I never knew Sears had its own book club, from 1943 to 1959, that sold books through its catalog. That was the Peoples Book Club. It made sense in light of the quality. The book's pages were pulp paper - you hardly ever see that in hardcovers - and the cover was in very bad condition.

I was able to do a slam-bang repair job on the cover, though, thanks to a liberal application of Elmers Clear School Glue, and so it's back on my shelf.
at August 02, 2018 No comments: