Last night Patricia and I watched two imported shows on the local PBS station - which in our case, because we live so far in East Texas, is out of Shreveport, Louisiana.

Both are from Australia, and both are set in the 1950s. The first was "A Place to Call Home". The second was "The Dr. Blake Mysteries." They come on one after another on Friday nights.

After the second show finished, I turned to Patricia and said, "What is the deal with Australians and newspaper owners? They don't seem to think very highly of them, do they?"
at September 29, 2018 No comments:

I had a great time at Fencon this past weekend. I had a good schedule and all the panels went great.

I wasn’t given any programming on Friday, which worked out fine. I spent Friday at my office as normal (remember, I am self-employed) and then Patricia and I drove into Dallas Saturday and stayed overnight.

I was the moderator for my first panel, on the Founding Mothers and Fathers of Science Fiction. There was a good turnout of 20 people, and all the panelists were there except Lillian Stewart Carl. I ran into her beforehand and she begged off, saying her allergies were killing her and she was losing her voice. Myself and the others – Dean Anderson, Ethan Nahte and Seth Skorkowsky – did an good job, at least from the response from the audience.

Alexi Glynn Latner moderated the panel on Distant Shores. John DeLaughter was absent, but we were joined by Karl Gallagher and Dave Schroeder. The audience was even larger, and again, everyone seemed to enjoy it.

My last panel of the convention, How Authors Predicted the Future, was the highlight for me, as I got to sit with and next to Larry Niven. The other panelists were Moderator Tim Morgan and Dean Anderson again. The place was packed and again, a great panel.

Thanks to a great bunch of panelists!
at September 25, 2018 No comments: 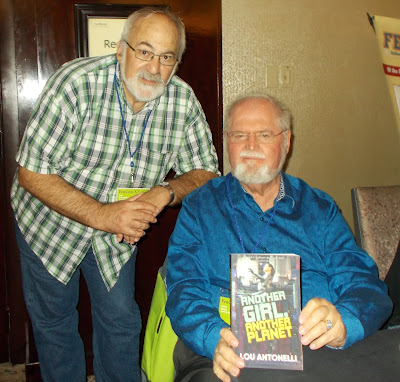 Had a great time at Fencon Saturday and Sunday. I presented Guest of Honor Larry Niven with a hard copy of my Dragon-nominated alternate history "Another Girl, Another Planet". Larry read it in 2016 and loved it, giving me a neat cover blurb.

I met him at the first Fencon in 2004. I would have sent Larry a published copy of the book earlier, but when I learned he was returning to Fencon this year as GOH again, I wanted to present it in person.

When I first met Larry in 2004, I told him I just had a story accepted by Gardner Dozois for Asimov's, and it was my first pro sale.

He quipped, "I bet you hope it isn't you last pro sale!"

Thankfully, it wasn't, but "A Rocket for the Republic" remains my only sale to Asimov's.
at September 23, 2018 1 comment:

There's a romantic myth that family owned businesses and mom and pop outfits are intrinsically better than chain-owned and corporate outfits. Trust me, this is not always true. The reason such businesses do well is because of better accountability and a lack of bureaucracy. But family-owned businesses can suffer badly from disorganization and nepotism.

Years ago, I was an editor for a small chain of weekly newspapers - just seven. It was run by a husband and wife team.It happened that at one time both the editor and staff writer jobs at one paper opened up at the same time.

The husband was the journalist and he interviewed and ultimately hired the two people. One day the fellow who was hired to be the reporter comes in. The wife greets him and says, "So you must be the new editor!" The fellow didn't correct her. She got his paperwork filled out and got him all proper.

Then the guy who was supposed to be the editor shows up the next day. I don't know exactly what went down, but the fellow came on board as the reporter.

I've always had a good memory, so when the publisher had mentioned the two names, I remembered which was which, but apparently the wife didn't.

In the long run the paper suffered because of the wrong person in the job. A few years later and it was in bankruptcy.

A corporate-owned newspaper would have been better organized and I'm sure could have avoided such a snafu.
at September 20, 2018 No comments:

Our efforts to housebreak Bella have been unsuccessful. We will probably need professional help. A few weeks ago I started rewarding her with treats when she was a good girl, and that worked somewhat, well enough that I took the puppy pads up. But results were mixed. If when she goes out she is accompanied by one or both of her siblings, she often distracted and forgets what she needed to do. Then she comes back in the house and remembers to do it.

She also is not very good at getting our attention when she needs to go out. She's too subtle and we often miss her signals. She doesn't try very hard at it. Peltro and Sugar will stand at the back door, and if need be, bark. but Bella doesn't.

Patricia and I now are talking about the need to refinish the hardwood floor in the living room because of the staining. And this afternoon I went and put down puppy pads again. She was probably better at going outside a few weeks ago, she seems to have regressed. I will probably start calling around for some professional advice this week.
at September 09, 2018 No comments:

Bella is back home. sleeping in her kennel for the night, in my air conditioned library building behind the house.

I picked her up at the vet this morning after her overnight stay following her spaying. As I was afraid would be the case, the experience terrified her. I had to carry her to the car, and when I put her down she was trembling and fearful.

I took her to the office and she spent the rest of the day there with us. She quickly regained her confidence and after an hour or so she had eaten and was snoozing at her mommy's fee under her desk.

She's back to normal, and that chore is out of the way. We are responsible furrbaby parents, and she won't be having any puppies.
at September 07, 2018 No comments:

You know the old saying, don't wait until the eulogy to say something good about someone.

I just wanted to say that Selina Rosen is one of the best examples of humanity I know - friendly, helpful, caring, level-headed, hard working, and long suffering. Her enthusiasm for life is contagious. She's fun and just one of the nicest, most down-to-earth people I know. The only people who don't like her are those who haven't met her.

The Talmud says that only 36 truly righteous people are living among us at any given time; they are anonymous, and it is for their sake alone that the world is not destroyed.

They may be anonymous, but if I were a betting man, I'd bet Selina is one of them.
at September 03, 2018 No comments: