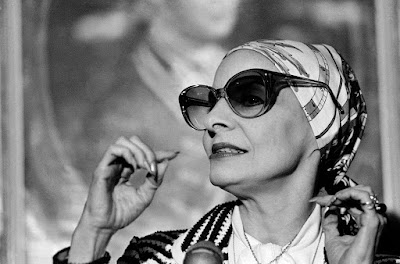 Alonso was one of the greatest ballerinas of the 20th century. Her personal reputation foundered in mid-century because of her support of Fidel Castro and the Cuban Communist Revolution.

Alonso suffered most of her life with very poor eyesight, and was essentially blind for many decades. My personal theory is that she is the model for the image of The Blind Ballerina.

Our society has many of these kind of cartoonish folk images - one of the best known is having a man wearing only a barrel to indicate he's lost all his money.

One common image of the stereotyped gypsy, and in fact Michael Swanwick explored the idea of how these kinds of images are created in a story published in 2000, "The Raggle Taggle Gypsy-O".

Years ago, when I was just just starting out, I had a thought - what if you suspect YOU are one of these tropes? This led to my story, "Won't You Come Home, Bill Buckley", where a rising author attends a reception and meets both Buckley and Alonso.

Buckley is the model for the erudite and cultured reactionary. When someone snaps a photo of the three people together - Buckley, Alsonso and the author - she learns something she probably wishes she didn't know.

Another thing that contributed to the story is that in 1984 I took a date to a performance of The Village Light Opera Group in New York. During the intermission of "The Yeoman of the Guard", I met Isaac Asimov.

While we exchanged pleasantries in the lobby, someone walked up and took our photo.

"Is that a friend of yours?" asked Asimov.

"Never saw her before in my life," I replied.

I wish to hell I knew who took the picture, I would give so much to see it today. I had no idea at the time I would write science fiction - my first pro publication was 21 years in the future.

Well, "Won't You Come Home, Bill Buckley" was published in 2005 by Bewildering Stories and it is still archived on-line. Here's the link. It's one of my lesser-known works. Hope you enjoy it!
at October 19, 2019 No comments: