Just in time for summer reading 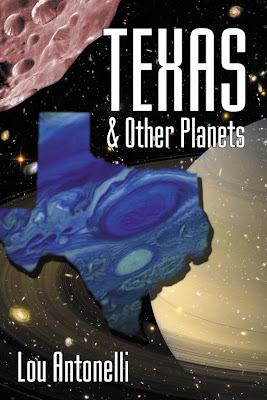 Grab a good book and visit “Texas & Other Planets”

MOUNT PLEASANT, Texas – Texas once was the Lone Star Republic, and to this day some people claim the state is a “whole ‘nother country” – but is Texas also a planet?
You might think that way after you read “Texas & Other Planets”, the second collection of short stories published by East Texas author Lou Antonelli.
Just published by the Merry Blacksmith Press of Rhode Island, “Texas & Other Planets” is a compilation of 20 of the best Antonelli science fiction and fantasy stories previously published in the U.S., England and Australia during the past decade.
From a Texarkana struggling to recover from the effects of World War III (“Avatar”), to a Waxahachie that runs on magic instead of science (“The Witch of Waxahachie”), to a Dallas turning to dust as global warming sets in (“Rome, If You Want To”) to a Laredo nuked by Irish terrorists (“Dispatches from The Troubles”), with a stop at the Battle of San Jacinto thrown in (“A Djinn for General Houston”), most of Antonelli’s imaginative stories are set in his adopted home state.
Antonelli, who is the managing editor of the Mount Pleasant Daily Tribune in Titus County in East Texas, has had 54 short stories published since 2003. His first reprint collection, “Fantastic Texas”, was published in 2009.
“The Year’s Best Science Fiction” published by St. Martin’s Press in New York City has cited ten Antonelli stories in its annual “Honorable Mentions” list published in conjunction with its anthology. All are included in “Texas & Other Planets”.
Gardner Dozois, the former editor of Asimov’s Science Fiction who published “A Rocket for the Republic” – the leadoff story in the collection - and who is currently editor of “The Year’s Best Science Fiction”, writes on the cover of “Texas & Other Planets” that “Lou Antonelli is an ambitious young writer with lots of imagination and verve, who never forgets about the mysteries of the human heart.”
“Texas & Other Planets” is available from Amazon or directly from the publisher at http://www.merryblacksmith.com/.
at May 09, 2011