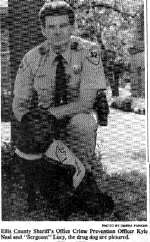 I'm looking forward to the April issue of Jim Baen's Universe, which will feature my alternate history/fantasy story "The Witch of Waxahachie". WW is my most prestigious publication since "A Rocket for the Republic" in the September 2005 issue of Asimov's Science Fiction, and only my second story which rises to the level of what the Science Fiction Writers of America (SFWA) considers a 'pro sale'.
WW is currently available as an e-arc (electronic advance review copy) for Baen subscribers. It will have art when it goes live on publication.
As so often happens, many characters in the story are based on or are composites of people I have known. A crucial character is Sergeant Lucy, a police dog. I am proud to have been able to write a story where a dog - a normal real dog, not a fantasy dog or a transhuman dog - plays an important role, and Sergeant Lucy fit the bill.
There was a real Sergeant Lucy in the Ellis County, Texas, sheriff's department in the 1980s. Just a few weeks ago I was happy - as a result of Googling around - to find a photo, albeit of poor quality, of the real and original Sergeant Lucy. The deputy who was Lucy's handler was running for constable in the March 4th primary, and he scanned and posted some newspaper clipping documenting his experience. One of these from Oct 1989 showed him with Sergeant Lucy. I remember this story - I was editor of the newspaper at the time.
Ironically, Lucy's old handler lost his nomination bid, but it's thanks to him I found what little record is left of the real Sergeant Lucy.
at March 07, 2008