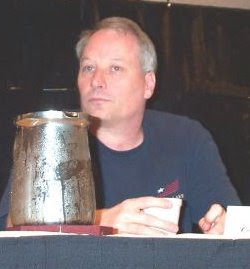 Although I've mentioned it already on this blog, it bears repeating that the Nebula Awards Weekend will be in Austin April 25-27.

The registration rate is now $125, and the later you wait, the greater the possibility that you may not get a seat for the banquet.

As I previously mentioned, Joe R. Lansdale (right) and Ardath Mayhar have been named Toastmaster and Author Emeritus. I've cut and pasted some info here from the SFWA's news page:

"The event will take place at the Omni Austin Hotel Downtown. The event will be hosted by the Austin Literary Arts Maintenance Organization (ALAMO), with the assistance of SFWA members Elizabeth Moon, John Moore and Lee Martindale. Advance registration is required, but the weekend is open to the general public.

"Joe R. Lansdale of Nacogdoches, Texas, is regarded as one of the most thoroughly Texan authors writing today. The author and editor of more than two dozen novels, short story collections and anthologies, he has won a variety of awards in multiple fields including the Edgar award for The Bottoms, the Bram Stoker Award six times and the British Fantasy Award. In 2007 he was named Grandmaster by the World Horror Convention. He has also written westerns, comics, dark suspense, humorous pieces and gonzo fiction that can only be described as Lansdale-esque. In addition to his writing, Lansdale is the founder and Grandmaster of the martial arts system Shen Chuan and an inductee of the International Martial Arts Hall of Fame. His website can be found at www.joerlansdale.com.

"Ardath Mayhar of Nacogdoches, Texas, is known for her sweet, grandmotherly appearance which belies a quick wit and fast tongue. The author of 61 novels along with numerous short stories and poems, her publishing career began in 1979 with the philosophical fantasy How the Gods Wove in Kyrannon, and in 1982 she published Golden Dream: A Fuzzy Odyssey, a sequel to H. Beam Pipers Little Fuzzy. From there she published a wide variety of works including science fiction (The World Ends in Hickory Hollow), fantasy (Exile on Vlahil), westerns (under the pseudonym Frank Cannon), a mountain man series (under the pseudonym John Kildeer), horror (The Wall), folklore (Slewfoot Sally and the Flying Mule) and contemporary fiction (Medicine Walk). She also served on the Writers Digest instructional staff, passing her knowledge and critical eye on to younger writers. Her website can be found at ofearna.us/books/mayhar/books.html."

Michael Moorcock as been picked for the Grandmaster award. Again, a cut and paste from the SFWA newsroom:

"Famed British author Michael Moorcock will be honored as the next Damon Knight Grand Master for 2008 by the Science Fiction and Fantasy Writers of America. The Grand Master represents SFWA's highest accolade and recognizes excellence for a lifetime of contributions to the genres of science fiction and fantasy.

"SFWA President Michael Capobianco announced the decision after consulting with the Board of Directors and participating past presidents. 'As one of the early members of SFWA I feel especially honoured to receive the Grand Master award and particularly pleased that I'll be in Austin to accept it, Moorcock said.

"Named one of the 50 greatest postwar British writers by The Times of London, Moorcock is best-known for his stories featuring the albino swordsman Elric of Melniboné. Other popular characters created by the prolific Moorcock include Jerry Cornelius and Hawkmoon, characters that, like Elric, are linked by their stories in what has come to be known as the Eternal Champion cycle. Among his many awards, Moorcock won the 1967 Nebula Award for Behold the Man, the 1993 British Fantasy Award and the 2000 World Fantasy Award for lifetime achievement. Other notable works by Moorcock include The Dancers at the End of Time and Mother London.

Lansdale and Mayhar are home-grown born and bred native Texans. Moorcock has lived here many years; from what Howard Waldrop says, he lived in Bastrop.
at March 09, 2008