Pilgrimage to Butler (or how Robert Heinlein's ghost pranked me)

When I drove on Friday Kansas City to attend ConQuest, I noticed that Butler, Missouri - the birthplace of Robert Heinlein - was on the way. I decided that on the way back I would stop and visit the house where he was born in 1907.

Monday morning I pulled off southbound Hwy. 71 and drove into Butler. The city has a few small signs noting the direction to the house, and I found it fairly easily. It is located at 805 North Fulton Street; a sign - which apparently once hung from a post - marking the spot ("Birthplace of Robert Heinlein, Dean of Science Fiction writers") was propped up against the bottom of the porch.

I took the obligatory selfie - which was hard to do because the sign was so low to the ground - and then hopped back into my car to continue the journey home.

Crank. Grind. It wouldn't turn over!

I was completely shocked, because the car hadn't given me a lick of trouble all weekend. It sounded fine, but wouldn't kick in.

I kept trying. No dice. I have AAA, so I placed a call. 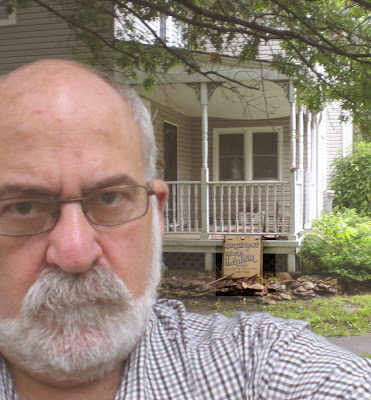 An hour later a nice young man from Don's Towing showed up. He couldn't start it, either, so he towed it to the shop. Being Memorial Day, it was closed of course.

I was looking forward to staying overnight at a local motel and having the car attended to on Tuesday. When I went to retrieve my bags, just for grins I turned the key one last time.

"It's a miracle!," said the tow truck operator.

I thanked the fellow for the tow, and took back off. I made it fine the rest of the trip.

Now, there were a few times along the way the car seemed to sputter, in a way that made me think maybe I had tanked up with some bad gas in Kansas City. Indeed, after filling up again later in the day, it ran normally and I made it home in one piece, Southern Oklahoma thunderstorms notwithstanding.

I guess that's what happened.

Or maybe Bob Heinlein wanted to teach me a lesson.

One last note: I already posted this photo on my Facebook page. A Brazilian fan, Flávio Medeiros Jr. commented "I can see a ghost looking through that window."