"Governor Shivers and the Golem Army of Texas" 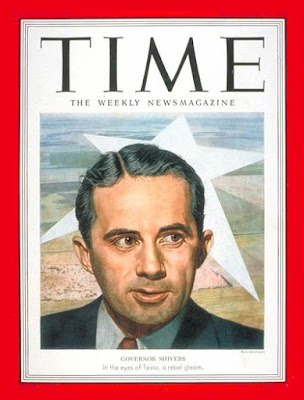 The death this past weekend of former Gov. Bill Clements, who was the first governor to serve two full four-year terms in office, reminded me of Allan Shivers, who held the previous record of service at seven and a half years (Rick Perry has subsequently eclipsed them both).
When I drove into Texas on Jan. 15, 1985, in my little blue Gremlin, the radio was full of talk of Shivers, who died the day before. I had no idea who the man was.
I later learned that Shivers played a pivotal tole in the evolution of modern Texas. When the Democrats nominated Adlai Stevenson for president in 1952, and again in 1956, it was Shivers who led the "Democrats for Ike" with the reasoning that Texans should support the more conservative candidate, regardless of party.
Thanks to the Governor and his "Shivercrats", the habit of voting yellow dog Democratic each election was broken (Eisenhower carried Texas in both elections). Bill Clements was the eventual beneficiary, being elected the first Republican governor of Texas since Reconstruction in 1978.
Thinking on it, it occurred to me that Shivers is simply a cool name, and one of those flashes of inspiration that occasionally hits me, a title came to me, "Governor Shivers and the Golem Army of Texas".
I started writing Monday, and so far I'm up to 3,100 words. It's a welcome break from my Rebuild Series, and a great opportunity to weave in some crazy secret history set in the Civil Rights Era, the same milieu as "The Fontane Sisters are Dead", which also features a golem.
The picture I've used to illustrate this post is the cover of Time magazine from Sept. 29, 1952, when Shivers' going over to Eisenhower was making waves nationally.
#

Thanks to John DeNardo on listing my previous post, "Paean to a Pen", over at SF Signal. I received a few nice comments.
at June 01, 2011