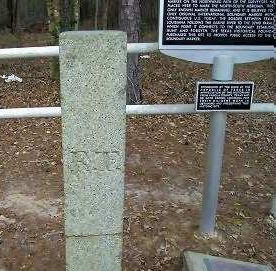 I don't think I've ever posted this before, but thinking about the third anniversary of the publication of "A Rocket for the Republic" got me thinking.

One of those granite markers was on the banks of the Sabine and fell into the river years ago, but the other remains. This a view of the shaft as it is today. This view shows the side with the R.T. for the Republic of Texas on it; the other side has USA. A third side has longitude information.
at August 03, 2008