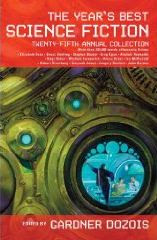 I just got my copy of Gardner Dozois' annual anthology, "The Year's Best Science Fiction, 25th annual collection". I had to ask my local Hastings Bookstore to order it for me. I see that my story "Avatar", which was published by the e-zine Darker Matter in April 2007, made the honors list.

This is the ninth honorable mention I've had in five years. Other stories previously recognized are:

I was shut out last year.

"Darker Matter" has since folded, but my story is still archived, if you'd like to read it: http://www.darkermatter.com/issue2/avatar.php
at August 08, 2008