Clarke to Be Buried Saturday 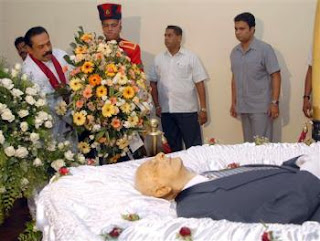 In this photograph released by the President's office, Sri Lankan President Mahinda Rajapaksa, left, places a wreath of flowers near the body of Arthur C. Clarke in Colombo, Sri Lanka, Thursday, March 20, 2008.

Clarke will be buried Saturday in his adopted country of Sri Lanka in a secular funeral according to his wishes, a spokesman said Thursday.

"It will be a secular, simple funeral and there will be no speeches," said Clarke's aide Nalaka Gunawardena.

Clarke who died at the age of 90 on Wednesday had left written instructions that no religious rites of any faith should be associated with his funeral.

He will be buried at Colombo's general cemetery in a plot owned by his friend and diving company partner with whom the writer lived for decades, Gunawardena said.

Fred Clarke, his brother, had arrived in the island to participate in the funeral, the aide added.
at March 20, 2008